Pairing wine with cheese is far from rocket science—even the “wrong” matches will still taste (mostly) stellar. That being said, you didn’t spend who-remembers-how-much on that sommelier-led pairing course last year to be left in the dark when you need the advice—and the brie—most.

Here, we tapped three wine and dairy professionals for the top mistakes people make when matching wine with cheese, plus how to fix them. Because who says you need to host a crowd to fix yourself a fancy, delicious hors d’oeuvres?

According to Laura Werlin, a James Beard Award-winning cheese author, red wine typically has more tannins and low acidity which can cause soft cheeses to taste chalky. Instead, reach for an equally full-bodied, flavorful cheese, such as an aged cheddar, if you must drink a red wine. The tannins act as a palate cleanser, making each bite and sip just as delicious as the last.

The pairing rule of ‘like with like’ rings true when pairing wine and cheese. “In general, white wines pair best with lighter, milder cheeses,” says Werlin. This allows the fresh, often fruity notes of the white wine to enhance the sweet creaminess of the cheese. In fact, Werlin suggests pairing most cheeses with white wines. An unoaked Chardonnay pairs well with an alpine-style butterkase or Swiss cheese while Riesling goes with asiago or Parmesan, and Sauvignon Blanc with cheddar or gouda.

“When tasting a variety of cheeses with wine, it is always good to have a palate cleanser,” says Ken Monteleone, owner of cheese shop Fromagination. He recommends Potters wheat or white crackers, water crackers, or bread (like a plain baguette, nothing grainy)—they act like sponges to absorb any lingering flavors. Also, avoid anything flavored or overly salty, as the point is to refresh the palate for each new wine.

Rushing Through Without Savoring the Process

“Before we start a tasting with a variety of our delicious cheeses, we like to open up the taste buds,” says Monteleone. “Pinch your nose and then un-pinch and you will be ready for a wine and cheese tasting.” Remember to savor and taste. “Slow down, look and smell, then taste. Visualize and isolate flavors as you’re tasting. Identify flavors in the wine and the cheese before moving on. Pay attention to texture and body.”

Pairing wine and cheese is all about finding new flavor combinations and having fun. “Try a Wisconsin original cheese, such as Sartori’s Merlot BellaVitano with Fantesca King Richards Reserve Pinot Noir 2018 and Crissante Barolo 2014,” says D Lynn Proctor, director at Fantesca Estate and Winery. “The style, the palate, the texture is simply amazing.” Cheese should take you on an adventure of taste and texture. Get out of your comfort zone by trying something unique like Roelli’s Red Rock, a bright orange Cheddar Blue combination. Bubbles are very forgiving, so a sparkling wine is always a good choice for cheese wildcards. Want another unique idea? Grab some bubbly and pair it with a blue cheese for an unexpected dessert pairing after dinner. The crisp carbonation of the sparkling wine will cut the creaminess of the bold, blue cheese.

Taking the Task Too Seriously

“You’re here to learn and experiment, and not every pairing is going to take the world by storm,” assures Molly Browne, the education manager for Dairy Farmers of Wisconsin and an American Cheese Society Certified Cheese Professional. “The worst thing that you can happen is that you eat something slightly less than delicious, and that’s just motivation to buy more cheese and try again.” And go outside your comfort zone. It’s great to pick one beverage to pair with one wine, but you will learn a lot more from tasting around the board/across the flight. “Once you’ve sampled your intended pairing, push your palate even further by trying an unintentional pairing and seeing what happens.”

Kiwis are drinking their red wines too warm and our whites too cold, according to expert sommeliers.

Refrigeration leaves white too cold, and chances are red is too warm in the current summer weather.

Wellington wine bar Noblerot served its wines at a range of temperatures according to the varietal; the prime range for red wine was between 18 and 22 degrees.

Co-owner and sommelier Maciej Zimny said lighter, fruitier reds, such as pinot noir, lent themselves to being chilled to the bottom of that range.

During warmer summer weather, Zimny recommended chilling red wine from up to 10 minutes before serving, which would reduce the temperature by between three and five degrees.

“When you taste the wine, at a lower temperature it seems complete,” he said.

“Even when it’s slightly colder that it should be it will provide much more pleasure.”

That’s because of the alcoholic smell was exaggerated when it was warm, which was unappetising, according sommelier at Auckland’s French Cafe, Stephanie Guth.

She said. however, the sight of a chilled red wine was odd for customers.

“You want to do it justice but it’s such a weird thing for people to see, red wine in an ice bucket, even though you know it might benefit from it,” Guth said.

Twenty minutes in an ice-bucket before opening and drinking might help to boost the flavour in a pinot noir.

“The more complex the wine you have, the warmer it should be served,” Zimny said, referring to rich red wines such as merlot or Bordeaux varietals.

So chardonnay’s flavours lent better to slightly warmer temperatures than sauvignon blanc, about 14 degrees as opposed to 10 degrees, because it was important to make sure oak flavours were prominent.

Pinot noir and chardonnay hailed from the Burgundy region of France, and both were classically stored in the same cellar under the same conditions. He said wines have either been served too warm or too cold since the invention of refrigerators.

Cellar temperature was perceived as something quite different to what was initially intended, room temperature, Guth said.

“It doesn’t harm the wine but you tend to get a little more out of the aromas.”

The only reason one should drink a bottle straight out of the fridge was “if you don’t want to taste your wine”, she said.

Those of you who know me will know that my preference clearly lies with red wines, however, even I have to admit that the weather has been rather too hot for the heavier reds. It has been suggested that we should cool our reds a little and not refrigerate the living daylight out of our whites. I’m straight into experimentation with the concept.

See the right temperature to serve every type of wine

The programme for the year is now taking shape with some good tastings in prospect. We will keep you updated as we go and we hope we can have a year of exceptional tastings.

Invariably someone leaves something at Derek’s place after the January BBQ. This time he has found a squarish white plastic bowl that does not belong to him. Let us know if this is your bowl and we will work out a way to return it. 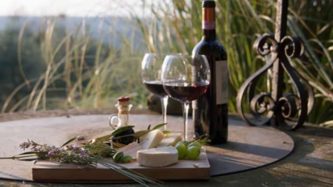 If you needed another excuse to have some cheese with your wine tonight, we are hooking you up!

A recent study by the Global Dairy Platform, Dairy Research Institute and Dairy Australia has found that consuming cheese doesn’t increase the risk of heart attacks and strokes.

“There’s quite as widespread but mistaken belief among the public that dairy products in general can be bad for you, but that’s a misconception,” Ian Givens, a nutrition professor at Reading University told The Guardian. “While it is a widely held belief, our research shows that that’s wrong.”

And red wine, in moderation, can help your heart and your brain, according to a recent study published in the journal Frontiers in Nutrition.

The study showed that when wine residue passed through the gut it has the ability to prevent cells from dying, and therefore delay potential neurodegenerative diseases.

What a night, with Luke Skeer, a senior wine makers from Wynns, presenting a range of prestigious wines from their Coonawarra Estate.

There were reserve wines, some new elite releases and new labels not previously seen in NZ, along with the more well known Michael Shiraz and John Riddoch Cabernet.

Admittedly the evening was heavy on reds which may not have been to everyone’s taste although the red lovers thoroughly enjoyed it. The committee were a little disappointed with the turn out with only 29 attending but appreciate that an evening of reds may not have suited all members. A truly special evening from an iconic Australian producer.

We would especially like to thank James Cupit and the Cellar Room, Johnsonville for organising the evening. We remind members that the Cellar Room offers discounts to Club members and would ask that you be generous in your support. 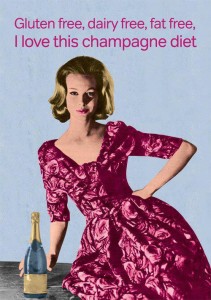 Recent research from the University of Reading has found champagne has the same health benefits as found in red wine.

Champagne contains polyphenol antioxidants, which are believed to reduce the effects of cell damaging free radicals in the body. In particular, these antioxidants slow down the removal of nitric oxide from the blood, lowering blood pressure and therefore reducing the risk of heart disease and stroke.

Lead researcher Dr Jeremy Spencer says, “Our research has shown that drinking around two glasses of champagne can have beneficial effects on the way blood vessels function, in a similar way to that observed with red wine. We always encourage a responsible approach to alcohol consumption, but the fact that drinking Champagne has the potential to reduce the risks of suffering from cardiovascular diseases such as heart disease and strokes, is very exciting news.”

(Shall we assume that that is two glasses a day, not just two glasses ever. Despite this research I will continue to take my medicine in the form of red wine. – Ed)

Also check out How to gift wrap a champagne bottle. 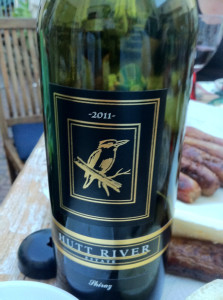 For those non-believers out there, here’s proof that Hutt River does indeed make wine.

This 2011 Hutt River Estate Shiraz was sent to our President, Anne Megget, by a friend dining at a BBQ in Australia recently.

The Hutt River label, owned by Cellarmaster Wines Australia, is one of about 80 labels on their books.

For those interested in viewing all Cellarmaster’s wine labels, visit the Australian Intellectual Property report website. To build the report use the following report criteria:

Looking to go out in the sun? Drinking wine may protect your skin, according to a new study. The study was recently published in the Journal of Agricultural and Food Chemistry and the research team was led by a biochemisty major at the University of Barcelona.

The study states that a certain compound found in grapes or grape derivatives may protect your skin from ultraviolet radiation.

It was found that the grape derivatives, called flavonoids (found in red wine), can stop the chemical reaction when the sun hits your skin that causes cells to die and cause skin damage. This, in turn, can help protect the skin from sunburn that many experience while out in the sun at this time of the year. It has been even linked to possibly even prevent skin cancer.

With the new study in place, Marta Cascante, the biochemist that led the study, is encouraging those that develop skin cream products to
incorporate the grape derivatives with the newly-found results. “This study supports the idea of using these products to protect the skin from cell damage and death caused by solar radiation, as well as increasing our understanding of the mechanism by which they act”, Cascante said.

For those that aren’t a big fan of drinking wine, or simply can’t, Cascante says that simply eating grapes can be just as effective. Previously, drinking wine in moderation has also been linked to preventing cavities, fighting Alzheimer’s, and preventing prostate  cancer.

Wine improves with age.
The older I get, the better I like it. 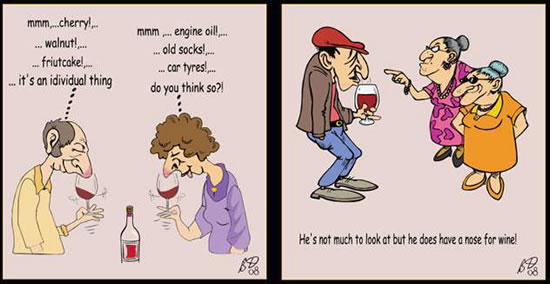