Simon Bell, the Representative for Colab Wine Merchants, presented a taste of Europe. There was a good turnout of 33 members and 3 guests. Everyone enjoyed the evening. It was a different style of meeting with lots of member interaction. Simon gave out larger glasses to demonstrate the difference using a large glass versus a small glass. It was an interesting evening with the tasting aimed for the layperson. There were 14 orders with a total of 96 bottles. Simon was pleased with the meeting and is keen to do another meeting. To revisit the wines included:q

One of the prospects he discussed, and would be happy to run, would be a non-threatening “Wine Options” evening. Your committee will consider this.

Members may recognise Simon’s name. He presented to the club back in April 2018 but has recently moved to a new company in wine and spirit wholesaling, Colab Wine Merchants Limited.

This company is interesting in that its 2 principal shareholders are 2 well-known wineries:

But of equal importance to us, Colab also handles 3 South Australian brands:

As you can see, all 3 of these areas are in the state of South Australia which is one of the iconic new world wine regions and so we are really looking forward to tasting some great wines from this area.

CoLab is now presenting a range of European wines from their portfolio. The wines to be presented include:

(These are some excerpts from an article which actually canvassed 10 things you might want to know about wine. I have picked out several that I found more interesting. The rest, in fact, we didn’t want to know.)

What is orange wine if it’s not from oranges?

Orange, some say, is the new rosé, occupying the demilitarised zone between red and white. The colour crosses a spectrum – from pale apricot to enraged Trump, all the way to amber – but what’s really different about orange wine is the way it’s made. Traditionally, red wines are made from the juice of red grapes plus grape skins. Whites are made without skins.

Orange wines are made from white grapes but get the red-wine treatment – the juice is macerated with the skins, a technique dating back 8000 years to wine’s birthplace, Georgia. The resulting texture, tannin and colour means these “skin-contact” wines have more in common with reds than whites; styles vary from fruity, floral or earthy to sour and funky.

What is natural wine and why are people so excited about it?

Natural winemaking is a broad church in which wines are generally (purists say must be) made from grapes grown without commercial chemicals. Processing takes place with minimal “intervention” – so, for example, the wine may not be filtered to remove cloudiness. Additives, such as sulphur dioxide – used for centuries to keep wine tasting fresh – are shunned or kept to a minimum. It’s a departure from the kind of large-scale industrial winemaking that values hygiene and consistency over quirks and imperfections.

As with conventional wines, quality varies hugely. There’s no regulation of what’s called natural, so if you’re going that way to avoid chemicals, look for certified organic or biodynamic wines – they’re more likely to be what you’re paying for. When made by winemakers of skill and integrity, the best natural wines celebrate quality, individuality and character – hallmarks of all great wines, regardless of whether they’re pitched as natural.

Same grape, different name – one name is French, the other Italian, with “gris” and “grigio” both meaning “grey”. In Europe the French approach to making gris produces a highly perfumed wine with plenty of mouthfeel; grigio from Italy is often (not always) a crisper, lighter wine. “Better” is in the eye of the beholder – good news is they’re all food-friendly styles. So in short, no difference in the grape, just the name.

Why might some wines contain traces of eggs, fish or milk?

Egg whites with fish bladders and milk: a dish that might make guests at a Game of Thrones banquet actually welcome the post-dinner massacre. Yes, it’s medieval stuff – each of these has been used for centuries to “fine” wine. Fining is a process in which one or more of these proteins is dropped into unfinished wine to bind with components that taste bitter, astringent, or are likely to make the wine hazy. They are then removed. Traces, as the label states, may remain.
If any of the above have been used you’ll find them listed on the label as allergens. The fish bladder derivative also goes by the name isinglass and is rarely used in Australia but egg whites and milk products are still common.

How long will a wine keep after it’s been opened?

Like fish and houseguests, opened wine smells less appealing after three days. Aim to finish an open bottle over no more than two nights. As a rule of thumb, red wines stay in condition for longer than whites (some robust reds taste better on day two). Exposure to air changes the aroma and flavour of opened wine, so reseal a bottle you’re not planning to finish in one go.

A bottle that’s mostly full will last better than one with only a glass or two left. It’s about the proportion of air to wine – more air in the bottle means faster deterioration. Store an opened bottle upright, not on its side. If you keep a clean, empty half-bottle handy, decant unfinished wine into that – it will stay fresher than in a full-size bottle. Otherwise, start scouting wine-saving devices.

(This last item may not reflect editorial opinion, surely once the bottle is opened it deserves to be finished in one sitting. The person I live with frequently draws my attention to the week that passes between a tasting and when the committee downs the tasting leftovers, but members may not understand the deterioration that has occurred during that time and the generous effort made by committee members to get rid of these leftovers on their behalf.) 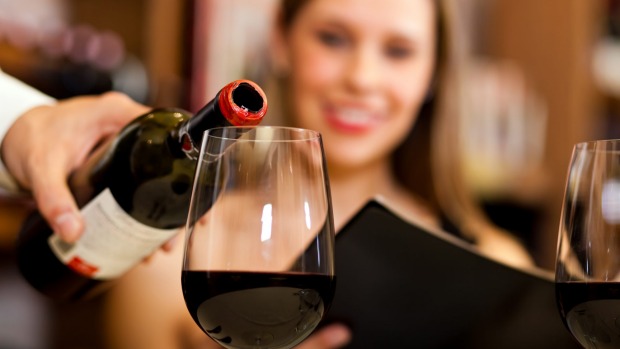 From merlot to shiraz, we’ve got a list of wines that reveal the truth about your personality. Which one are you most suited to?

You’re the life of the party. You have no problem dancing on tables. You’re a true free spirit. You always seem to try new things because life’s too short.

Always assertive and direct, you command discussion and want your voice to be heard. You enjoy the classics and have a thing for old-world affairs. Just like Brad Pitt, you only get better with age.

The one known as “easy to drink,” just like you’re easy to get along with. You’re always a delightful partner for table conversation.

Fresh, elegant and graceful. You enjoy nothing better than the scent of sea breeze

You’re sweet and nice. Despite being genuine, people sometimes have a hard time agreeing with you.

One word: sophistication. You’re always in control and you’re good at what you do. The perfect mix of herbal and a little smoky.

You enjoy travelling the world as you yearn to immerse yourself in new cultures in order to connect with the world.

You’re bubbly and personable and people find you easy to be around and a pleasure to sip on.

The consensus was that this was a great meeting with enjoyable wines, much comment on the Olive Oil and the Modena Balsamic, and an enjoyable presentation from Michele of Cangrande.

There were good orders of both the wine and the oil and balsamic. Also there was biscotti provided by Carmel. This went down a treat and was enjoyed by all, thanks Carmel.

Great fun trying to keep up with the Italian names.

Michele Marai from Cangrande presented a fantastic line-up of some of Italy’s best exports – wine, olive oil, balsamic vinegar and finishing with biscotti to go along with ‘Il Fortificato’.

Michele is a very passionate speaker in true Italian style you’d expect coming from Verona; home of Romeo and Juliet.

Michele along with his assistant and taste tester Carlo (Michele’s father) introduced members to a fascinating range of quality Italian wines. What proved to be a hit was Michele knowledge of Venetian history and the background of the many smaller family owned wineries assembled as part of his wine portfolio for New Zealand.

Members were treated to a great range of wines including a magnificent Amarone della Valpolicella Classico; one of Italy’s top reds. Not for the cost conscious but definitely worth every euro. This wine would compete with the best New Zealand and Australia offers with its purple colour, spicy aroma, gutsy mouth feel and rich lingering tobacco and liquorice finish.

Amoarone della Valpolicella blend includes Corvina which provides the blend’s acidity and sour-cherry flavors while Rondinella is used to add colour and body. If you see this on your next wine list, go for it. You won’t be disappointed.

My three favourites on the night were the Prosecco, Negroamaro and Amarone. The Prosecco was fresh and lively with bosc pear and green apple notes, plump mouth feel and a lingering finish. The Negroamaro was more what I was expecting from an Italian red; rustic with strong savoury herb notes with a slight acidic finish. The Amarone was the hit of the show; big, bold luscious with a warming ripe plum mouth feel, and finishing like and express train.

Cangrande takes its name from Cangrande della Scala, a great military and political leader and a well known wine lover, who ruled Verona in the early thirteen hundreds, making Verona one of the most powerful forces in Italy.

Through the centuries, Verona has developed into one of the most important districts in the world for wine production, trading and marketing.

In this time, all over Italy, wine making has become an art. Italian wines are still getting better, and in the last few decades more and more producers have focused on improving quality, achieving some impressive results.

Thanks to their work, Italy has now become the number one wine producing and exporting country in the world. Many native grapes have recently become world famous, and the effort of the winemakers that chose quality over quantity is paying off.

An awful night weather wise which was something of a shame as the attendance was not as good as your committee had hoped. Despite this it was an interesting night with some really good wines, much enjoyed by those who attended. David Hughes was an informative and interesting presenter and he thoroughly enjoyed the evening despite the low attendance.

As intended, the evening concentrated on aromatics including: