We were to be entertained in September by Gordon Russell from Esk Valley. Gordon is described as one of the Godfathers of the wine industry.

Unfortunately, due to the current situation with the Delta variant of COVID19 this month’s Club evening has had to be cancelled. We can’t meet until we are down to Level 2.

While this is disappointing for us all, for your information and interest, the wines we were going to be tasting were largely from Esk Valley’s new range: Artisanal. Wine f.y.i.:

This event is a Martinborough school fundraiser event and was held on  Saturday 20th March, with participants able to choose their distance, either 10 or 21kms, as well as whether they wished to walk or run.

This was a well-organised event and was followed by live entertainment and prize-giving in Martinborough Square.

This event not only provided a lot of fun and an opportunity to see a little more of Martinborough’s landscape, but it also had the added novelty of the entry fee encompassing wines for you to taste at the many ‘water stops’ along the way.

If you want to know more or want to plan for the next event, I would recommend you go to and keep a watchful eye for the date of the next event.

Here are some photos of this year’s event to whet your appetite. 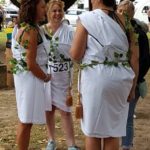 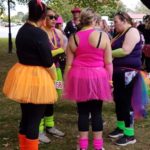 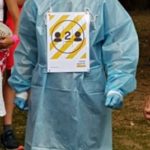 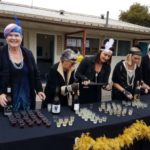 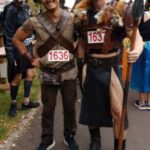 It was a brilliant day weather-wise, to travel via train, then bus to Martinborough. The three vineyards that were organised for us to visit, thanks to Gayl’s marvellous efforts, were Nga Waka, Tiwaiwaka and Grava/Alana.

We were divided into three groups, with each group assigned to two of the three vineyards to taste at – for ease of the smaller cellar tasting rooms, and the exuberance of the people attending.

Each of the vineyards was fully welcoming and at the Grava tasting room, if you asked, you could taste the Alana version of the wine being tasted, which was great if you were tasting with a partner.

At Grava/Alana where Lunar are the new owners, the vineyards brands are kept very separate. Grava has its vines on the Lake Ferry Road which has gravelly/alluvial soil and Alana’s wines are made from vineyards further in around Martinborough. The wines tasted were:

At Nga Waka – where the new American owners are stuck in Nevada – the wines tasted were:

At Tiwaiwaka the tastings were conducted under the branches of a lovely oak tree. The wines tasted were:

Orders were good for all vineyards and many have been delivered directly to members already, with the delivery of the smaller lots being arranged by Wayne and Murray in the coming days.

The bus driver, Craig, was brilliant and was always where he was needed.

Our tasting and lunch at Coney’s was entertaining, with one of the owners Tim Coney regaling us with his stories of the vineyard, his band and his love of opera (which is where the musical names for the wines come from), and life in general in the Wairarapa.

To accompany the wines each table as served with a small platter of food. The wines tasted during this session were:

The lunch was well-received when served. The train trip to the Wairarapa and back was an added highlight for everyone, with many having never travelled that line before.

Thanks to Gayl and Wayne for your efforts in making this event such a memorable occasion.

Finally, if you are interested in viewing the various photos taken on this wine trip, they are on the club’s gallery page.

This is the 2020 timetable and is indicative only. Some minor changes are expected for 2021

Some additional points to note:

A list of the world’s 50 best vineyards for wine tourism has named a Central Otago and a Hawke’s Bay estate as being among the best, as voted by ‘The World’s Top Wine Tourism Destination Academy‘.

And those two Kiwi vineyards rank in the top 20 in the world in the list out today.

Bodega Garzón in Uruguay was second for a consecutive year and Domäne Wachau in Austria jumped 16 places to claim the third spot this year.

But Central Otago’s Rippon, on the Wanaka-Mt Aspiring Rd, placed 13th and was also named the best vineyard in Australasia. The Hawke’s Bay’s Craggy Range was 17th best on the list. Last year, the biodynamic Rippon was in eighth place and Craggy Range was 11th.

“What makes Rippon one of the most desirable estates in the world to visit? The wines, the views, and the people – in equal measure. Lake Wanaka, an ancient moraine lake, shimmering under the crystal light of a sunny Central Otago day must count as one of the most Instagrammable images on the planet. That Rippon maintains 15ha of vines in this immaculate landscape is wonder enough, but the quality and sense of place of its wholly estate-grown wines gives this little corner of heaven an extra special appeal,” the citation said.

Burgundy-trained fourth-generation Mills and his team were praised along with the organic and biodynamic methods and intensive handwork on display. “Rippon’s cellar door is open for small group tastings by uncharged appointment throughout the year. Expect to enjoy an informal yet informed tasting of some of the best wines of Central Otago as you’re guided through a selection of five or six Rippon wines by a switched-on member of the Rippon team, who will talk you through the farm, the family’s history and if you’re game, the arcane world of biodynamics,” the list said.

On the 17th-ranked Craggy Range, the list said it was in a “stunning location in the shadow of Te Mata Peak, luxury boutique accommodation; award-winning restaurant”. It cited winemaker: Julian Grounds and said wines were “everything from aromatic whites to Bordeaux blends, and terroir Syrahs and Chardonnays.

“Over the past 20 years, Terry and Mary Peabody have expended every possible effort to make Craggy Range an exceptional visitor experience. Whether it’s the cellar door, inspired by some of the Napa Valley’s leading wineries, the award-winning restaurant with 360-degree views of the local landscape, or Craggy Range’s exceptional boutique accommodation, expect nothing but the best in this beautiful little corner of Hawke’s Bay,” the list said of that operation established in 1998.

“When it came to establishing their vineyards, from the off Terry and Mary pursued an innovative multi-regional approach, focusing on the Gimblett Gravels in Hawke’s Bay, ideally suited to high-quality reds including Syrah, Merlot and Cabernet Sauvignon and Te Muna Rd in Martinborough – better for Pinot Noir and Sauvignon Blanc – to produce a range of wines that speak eloquently of their place,” the list said.

“On a typical cellar visit, former New Zealand sommelier of the year Michael Bancks greets guests at the door and begins the tour in the main cellar building, Sophia, where you learn the history of Craggy Range. Then it’s on to the subterranean barrel hall, The Quarry, where you will taste from the estate’s unreleased prestige collection wines still in the barrel.

“From there, the tour moves on to the restaurant garden in the shadow of Te Mata peak. At the award-winning Craggy Range Restaurant, head chef Casey McDonald has devised a menu inspired by the elements and produced abundantly in Hawke’s Bay. Finally, it’s on to the sun terrace to enjoy a guided tasting of Craggy Range’s diverse multi-region range, with a variety of flight options available to suit each guest’s tastes,” the citation said.

The world’s best vineyards list is based on nominations from a voting academy made up of more than 500 wine experts, sommeliers, and travel correspondents from around the world. It aims to raise the profile of wine tourism and encourage travelers to enjoy wine-related experiences globally. 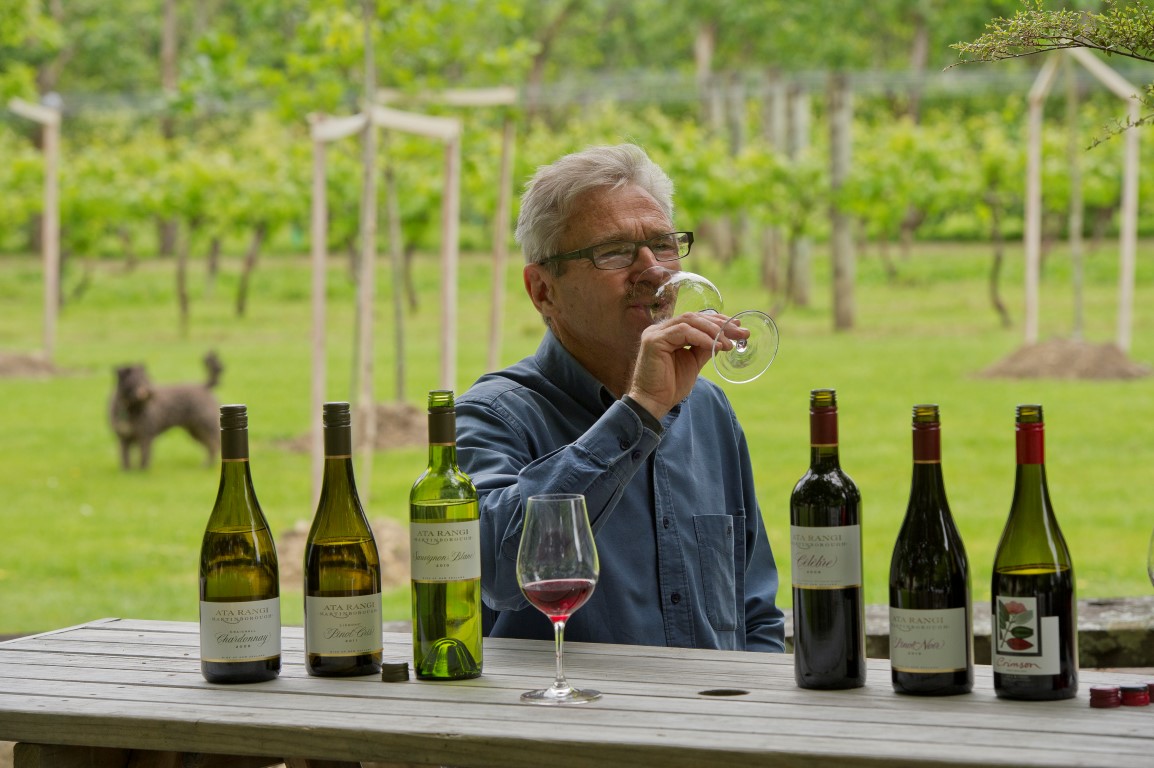 Ata Rangi, meaning “dawn sky” or “new beginning” is a small New Zealand winery with a big reputation for serious Pinot Noir. Located at the southern end of the North Island, it is owned and managed by a family trio – Clive Paton, his wife Phyll and his sister Alison.

Clive planted his first vines on a small, stony sheep paddock at the edge of the Martinborough village in 1980 as one of a handful of people who pioneered winegrowing in the area. Ata Rangi Pinot Noir is undoubtedly the flagship wine, and in 2010 was honoured with the inaugural Tipuranga Teitei o Aotearoa or “Grand Cru of New Zealand”.

With a skilled team in place, including dynamic winemaker Helen Masters, Clive now has more time to focus on his commitment to conservation and to the Ata Rangi alliance with Project Crimson. More event details early next month. 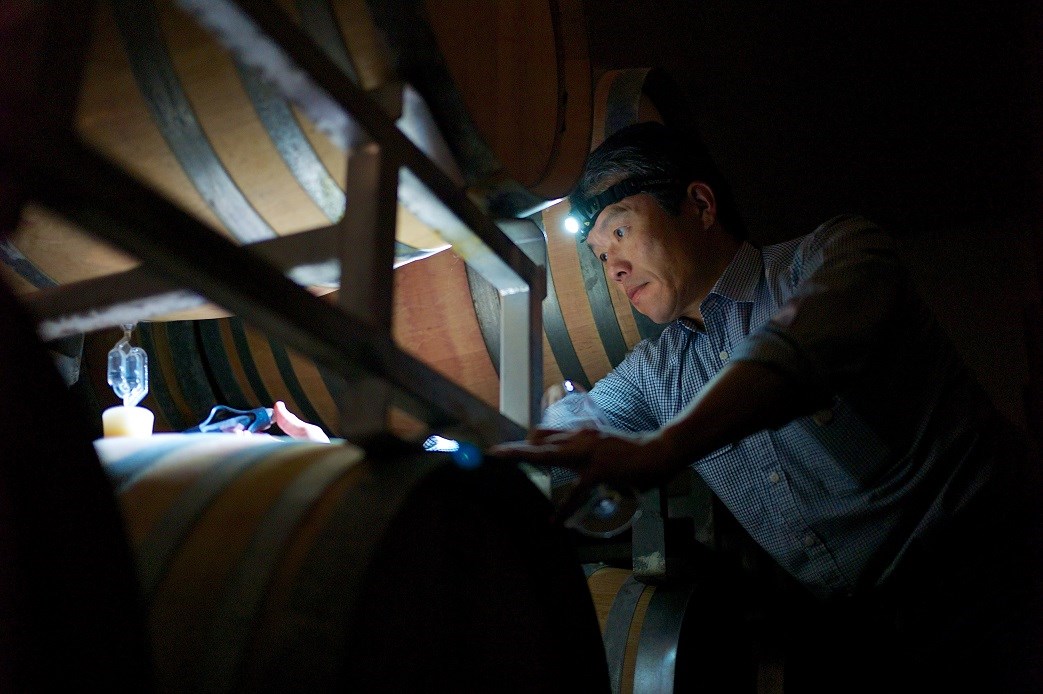 Kusuda is to be a short documentary about Tokyo-salaryman turned fastidious Martinborough-winemaker Hiro Kusuda as he navigates his way through the high stakes of vintage.

“Kusuda has been partially funded by the Loading Docs initiative, with support from the New Zealand Film Commission and NZ On Air. But in order to make the film, the film makers need to raise a minimum of an additional $2000 to cover our production costs.

Your support will allow us to hire equipment and cover crew travel costs to Martinborough. And if we’re able to raise more than $2000, we will be able to extend the amount of days we spend with Hiro.

Any help is greatly appreciated!”