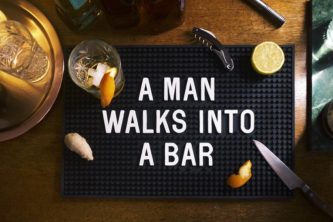 A man walks into a bar and ordered a glass of white wine. He took a sip of the wine, then tossed the remainder into the bartender’s face. Before the bartender could recover from the surprise, the man began weeping. “I’m really sorry. I keep doing that to bartenders. I can’t tell you how embarrassing it is to have a compulsion like this.”

Six months later, the man was back. “Did you do what I suggested?” the bartender asked, serving the glass of white wine. “I certainly did,” the man said. “I’ve been seeing the psychoanalyst twice a week.”

He took a sip of the wine. Then he threw the remainder into the bartender’s face. The flustered bartender wiped his face with a towel. “The doctor doesn’t seem to be doing you any good,” he spluttered. “On the contrary,” the man said,” he’s done me a world of good.”

“But you just threw the wine in my face again!” the bartender exclaimed. “Yes” the man said. “But it doesn’t embarrass me anymore!